Feng Shui in the News

Tulsa, Oklahoma – January 4, 2012 - Tommi Cox-Phipps, owner of Feng Shui Now and Red Ribbon Professional member of the IFSG, announced today her company’s involvement in ABC’s “Extreme Makeover: Home Edition”.  The popular television series built seven homes in seven days in Joplin to help the victims who lost homes and family members in last May’s devastating tornado.  This special two-hour program aired on ABC, Friday, January 13, 2012 and was also the 200th and final episode of the show series.  Feng Shui Now is listed as a sponsor for this project.

Cox-Phipps served as a key consultant for the designers for the Craftsman-style Feng Shui House.  Feng shui was important to the Nguyen family, who were selected out of hundreds of applicants, to receive this new home.  Cox-Phipps reviewed the floor plans, landscape designs and furniture placement for the new house and made suggestions for changes consistent with feng shui design principles.  She also helped make decisions about building materials, fabrics, plants and furniture selection for the house.

Cox-Phipps travelled to Joplin to perform a Blessing of the Land Ceremony.  The builder of the house attributed the completion of the house ahead of schedule to Cox-Phipps’ land blessing.  The builder commented that he had never had a building project proceed that smoothly.  Cox-Phipps spent three days on site to ensure the success of the project for the Nguyen family.

On the night of the tornado, Mr. Nguyen convinced his wife, who had already prepared dinner, to go to a restaurant because he wanted to eat seafood.  That decision saved their lives as the tornado destroyed their home while they were gone.  They now share their new “feng shui-ed” home with their daughter and granddaughter.

Click here for a photo gallery of the house’s interior and exterior.

Creating harmony in the bedroom

Energy is all around us. It can be witnessed in an ocean’s tide, the spin of a windmill, the fact that a lightbulb illuminates at the flip of a switch. According to Feng Shui practitioners and enthusiasts, the very nature of this ever-present current has a great deal of influence on the quality of our lives.

Feng Shui is a Chinese-founded practice that makes deliberate design decisions based on optimizing the flow of energy (or chi) from the earth’s electro-magnetic field. Founder of Feng Shui Now, Tommi Cox-Phipps, points out the practicalities of the techniques and theories.

“A lot of good Feng Shui advice is very practical,” Phipps said. “It’s a change you will immediately see and feel.”

As we sit around a table, I press for the do it yourself quick-fix version. Phipps is quick to inform me with a smile, “It’s not that simple. A little knowledge can be a dangerous thing.”

Although months of intensive study and years of practice cannot be consolidated into a single page, Phipps offers some tips for creating more harmony in your home and subsequently, your life.

Ones’ bedroom should be a sanctuary for sleeping well and for romantic relationships, but what should be a peaceful haven can very easily become a den of distraction, perpetually abuzz with sleep-inhibiting stimuli. Given the importance of rest and relationships, the bedroom is a great place to start.

Some things to keep in mind when Feng Shuing a bedroom to remedy a languishing romantic life.

Step 1: Clear the clutter. Although addressing clutter is not traditionally a component of Feng Shui, cluttered environments block the flow of chi. In her “Creating Harmony” clutter clearing workshops in partnership with Urban Furnishings, Phipps guides her students with the mantra, “Do I use it? Do I love it? Do I need it?” She then advises to try sitting with the object and contemplating, “Why is this object important to me?” Realize that the object is not the person who gave it to you. If you still struggle with parting with it, take a photograph so that you can still possess it.

Once the clutter is cleared, your starting point should be a clean, spacious and open environment. It’s important to not neglect clearing out underneath the bed. With blockages of chi in such an important bedroom element, too many stashed forgotten treasures could result in a languishing love life.

As Oprah’s clutter-busting guru Peter Walsh states, “Clutter is whatever is standing in between you and the life you want to live.” Under-bed clutter begone.

Step 2: Identify and fix anything in disrepair. Broken items are conducive to negativity.

Step 3: Take a look at your color scheme. The colors in your bedroom do much to set the tone. Cooler tones are very soothing and calming. Red and Pink are the fire colors and are said to spark romance. Many Feng Shui experts recommend skin tones. They are flattering to the skin, after all.

Phipps advises when selecting a color scheme, “What you’re trying to create is a very personal space so you want to find colors that support you based on how you respond to particular colors. Choose what feels best to you.”

Step 4: Consider the placement of the most important element in any bedroom. Bed placement is very impactful. You’ll want to position a solid headboard against a solid wall without any windows because according to Feng Shui, the chi can leak out in the middle of the night. You are most vulnerable to losing chi when you are sleeping.

Be mindful the foot of the bed is not opposing the door. This is the death posture. It goes without saying, that just isn’t good. You’ll want to be able to see the door from the bed but not be in direct opposition to it.

You can create symmetry in the bedroom with matching end tables and lamps. This symmetry represents equality in a romantic relationship.

Step 5: Accessories matter. Two of the most impactful accessories are mirrors and lighting fixtures. It’s prudent to use mirrors with caution. Mirrors reflect and magnify energy. That’s not ideal when you’re trying to sleep. It’s also best to not place a mirror directly opposing a door. Feng Shui principles dictate that a mirror will reflect energy right back out the door.

For lighting, you’ll want to choose flexible lighting that isn’t harsh and can be extinguished entirely when it’s time for sleep.

Step 6: Consider electromagnetic fields. We often neglect to consider all the electronics with which we surround ourselves in any given day. It’s best to keep televisions, computers, mobile phones and most importantly, charging devices away from your bed or out of the bedroom entirely. If you’re losing sleep, Phipps suggests that your electronics might just be the cause.

While the doors of energy awareness and personal wellness opened by Feng Shui are much wider than this small list, you might be surprised by how great an improvement these little things can make in your life. They certainly couldn’t hurt.

After rebuilding more than 200 homes in 50 states, “Extreme Makeover: Home Edition” airs its 200th episode and ends its weekly series run with the ultimate rip-your-heart-out finale set in Joplin, Mo.

Last October, the ABC series began its historic project of building seven homes for seven families in seven days in the city devastated by a mile-wide EF5 tornado last May 22, an event that killed approximately 160 people and destroyed nearly 8,000 homes. The families chosen by the show to receive the homes included those who had lost friends, lost children and who had all lost their homes on that catastrophic day. 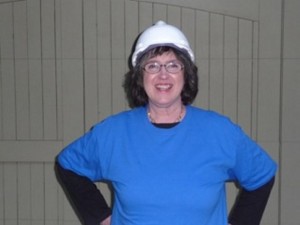 It was a massive task taken on by host Ty Pennington, the show’s design crew, 21 builders and a volunteer army of approximately 13,000 – including Tulsa’s Tommi Cox-Phipps, owner of Feng Shui Now who served as a consultant on one house, and Owasso storm chasers Kathryn and Jeff Piotrowski, who provided tornado video for the show and were interviewed by Pennington for the finale.

The show’s producers found Cox-Phipps through her website, she said Tuesday.

“They like to use local businesses and they needed a feng shui expert for the Craftsman-style feng shui house for the Nguyen family,” she said.

Cox-Phipps, who trained in the art of feng shui in San Francisco, reviewed floor plans, landscape designs and furniture placement for the house and made suggestions in keeping with feng shui design principles and helped with materials, plants, fabric and furniture selection. Feng shui is the Chinese practice of creating a harmonious environment by balancing energy with placement of objects within a home or business.

Feng shui was important to the Nguyen family, who were not home when their home was destroyed because of a last-minute decision to go out to dinner.

Most of her consulting work was through emails, she said, plus a short visit at the building site to perform a land blessing and a three-day visit later in October once the house was built.

“That’s just a good idea to do because the whole area was just devastated with the tornado winds that were so destructive,” she said in an interview.

On her later visit to Joplin, Cox-Phipps worked with the home’s designer Paige Hemmis and was still arranging closets and other items the day after the home was revealed to the family, she explained.

“I had to make sure it looked feng shiued as possible,” said Cox-Phipps who is married to a Tulsa attorney and has three sons, a granddaughter and a grandson.